Hey June, thanks for a month full of exciting reads and rereads. Featuring: unexpected rereads, a new gem of a TV show, and exciting seven books: 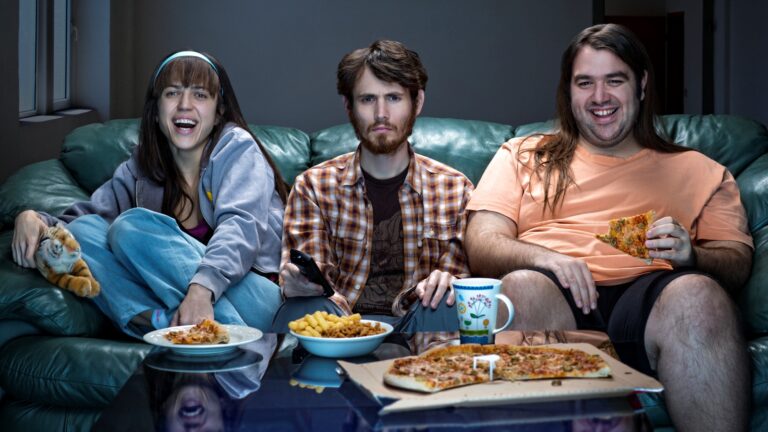 This new Israeli contemporary show follows three young people on the autism spectrum who share a flat together. And watching it felt like discovering a true gem.

I consider On the Spectrum to be a true surprise, considering how its slow start made me, foolishly, put it aside for a hot minute, but upon noticing my mind circling back to it, I, thankfully, went back to complete the remainder with stars in my eyes.

(That Husky in the left corner, though!!)

I know a show is good when, upon completing it, I make my mom look into the first episode so that I can vent all about it. I practically talked her ear off on the first episode alone… On the Spectrum is the kind of show I crave to devour all at once, so having to wait for new episodes to release every week is excruciating, so much so that I’m low-key piqued whenever an episode comes to an end; it always arrives all-too-soon.

The slow revealing nature of the show, with keeping the cards off the table to keep us engaged, was delicious. The creators trust us enough to slowly piece together the bigger picture through tiny revelations on our own. Plus, major props to the writers for not dropping plot lines the following episode. Something that occurred in previous episodes will probably receive closure within the next one. Like, the dog from the street. (Won’t go into details, though, because this show deserves to be watched and discovered through fresh eyes.)

The trailer with English subtitles:

The tree mains are:

That was my June wrap-up, thank you for reading!

The month of March was filled with contemporary rereads and new releases for me. I had a particular blast revisiting some of my favorite YA reads from the past couple of years (with Fangirl being the life of the party). In total, I read and reviewed ten books:

I finally caved in and created a Spotify this month and have been listening on repeat to The Walters and Lola Marsh. The latter, in particular, rocked my world this month. Be sure to give a listen below and comment some of your own favorite songs!

Hagar by Yochi Brandes. I picked this one up from my local library, and words cannot capture how utterly fantastic the first half is. I was completely swept up in the characters’ thigh-knit community created by the author. All the more, when a later love evolved between Hagar and a certain bookish someone. Their interactions held me beyond breathless; its magnitude called to mind The Beauty Queen of Jerusalem.

So when a storyline developed in the second half that left the characters caricatures of their former selves, I felt wholly devastated. Only one question roared in mind: Is it really that hard to ask for a happy relationship to unfold between two people – two Jewish people – and to stay that way forevermore, without tragedy hitting them…

Since the book has yet to be translated into English, as the author’s following books have, I’ve held off on writing a full review and instead opted to vent in this post. (Also because I’m still mad at the aforementioned.)

That was my March wrap-up, thank you for reading!

This month I put my focus and attention on making sure I dedicated as much of my reading time on more Jewish and Nonfiction reads. And I subsequently discovered a lot of noteworthy gems along the way.
In total, I read 13 books this month:

  Books I haven’t stopped thinking about: Pumpkinflowers by Matti Friedman.

It’s been months and months since I had the experience of a book imprinting such a palpable reaction on my everything. I feel like I can reach out and touch the pain and hurt reverberating off Pumpkinflowers.

It was one small hilltop in a small, unnamed war in the late 1990s, but it would send out ripples still felt worldwide today. The hill, in Lebanon, was called the Pumpkin; flowers was the military code word for “casualties.” Award-winning writer Matti Friedman re-creates the harrowing experience of a band of young soldiers–the author among them–charged with holding this remote outpost, a task that changed them forever and foreshadowed the unwinnable conflicts the United States would soon confront in Iraq, Afghanistan, and elsewhere.

No book has so drastically changed the course of my thinking in a single day as this one did. The intimate look at the soldiers’ lives hasn’t left me since. Avi’s story, in particular, hasn’t left me since. I got to know him gradually through his own letters, and I just can’t stop spinning back to how his surroundings rendered him aged beyond his years, yet simultaneously so full of youthful hope.

“It is said in their honor that they were prepared to sacrifice themselves for the rest of us, but of course they weren’t, not most—they just thought it wouldn’t happen to them, and the lucky ones weren’t given time to realize they were wrong.”

Ultimately, Matti Friedman carried out his novel with the utmost care and devotion.

Honorable Mention:
On a lighter note, I rediscovered my love for one of the most hilarious shows with the most lovable cast of characters. As I mentioned in my review for Unqualified by Anna Faris, thanks to watching a bunch of bloopers of Chris Pratt’s character in Parks and Recreation, I decided to go back to rewatch season three (THE BEST!). Similar to The Office, which I finished binge-watching in April 2016, my favorite seasons remain the second and third.

Since I only rewatched season three in January, that’ll be the main focus of my rambling thoughts:

My favorite episode of theirs has to be the one where they learn to adult, courtesy of Ben Wyatt because I LOVE domestic scenes. Going grocery shopping, doing laundry, going to the bank…my kind of jam.

That was my January wrap-up, thank you for reading!