November of 2016 introduced me to some of my favorite Nonfiction reads, so coming into it the following year, I was giddy with excitement for what’s in store. And Nonfiction November 2017 did not disappoint, thankfully.
In total I read 13 books, including collections of poems and essays, short stories, and graphic novels: 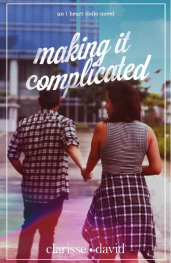 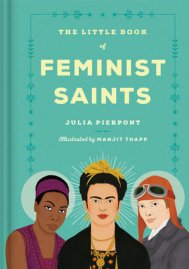 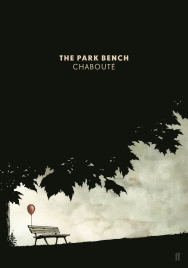 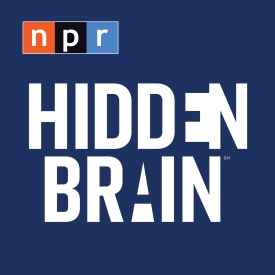 I discovered this podcast thanks to Meghan Hughes mentioning in her recent vlog a fascinating episode on coincidences (aka my favorite topic to discuss). I looked the podcast up online, went on to listen in rapid enthralment, and then checked out five more episodes consecutively in a single day. My curiosity was endless, and I found Hidden Brain best heard in a single uninterrupted sitting to get the most out of it.

The Hidden Brain helps curious people understand the world – and themselves. Using science and storytelling, Hidden Brain’s host Shankar Vedantam reveals the unconscious patterns that drive human behavior, the biases that shape our choices, and the triggers that direct the course of our relationships.

We have carefully curated topics, impossible to predict from episode to episode, ranging from the correlation and causation of loneliness and social media (Prisons of Our Own Making), to the “catfishing” con performed in 1985 (Lonely Hearts), and the effects that happen to your mind and body after prolonged periods without sleep (Eleven Days Without Sleep).

I highly, highly recommend giving Hidden Brain a listen as soon as possible.

Special posts featured this month on my blog:

I featured my first TV review on Netflix’s American Vandal, talking about why it’s the perfect show to binge-watch if you’re a fan of theories, conspiracies, and in-depth investigations. You can read my review in full here. Plus, watch the trailer below:

That was my November wrap-up, thank you for reading!

Feminist collections are truly not letting me down this month. With The Little Book of Feminist Saints by Julia Pierpont and now this empowering book, I’m pretty much settled for the year. Speaking of which, I began 2017 with Nasty Women by 404 Ink, and with the end in sight, I finished it with another Nasty Women.

But whereas 404 Ink’s Nasty Women is a call-to-action for feminists to share their experiences and accounts on what it is to be a woman in the 21st century, Samhita Mukhopadhyay’s collection features discussions on feminism in Trump’s America, as the title conveys.

When 53 percent of white women voted for Donald Trump and 94 percent of black women voted for Hillary Clinton, how can women unite in Trump’s America? Nasty Women includes inspiring essays from a diverse group of talented women writers who seek to provide a broad look at how we got here and what we need to do to move forward.

“In the chapters ahead we have curated some of the strongest voices writing at the intersection of feminism, identity, and personal experience with their own identity to meditate on what we lost that fateful night in November 2016 and what lessons we can take from it. ”

Replacing, “Why is this happening to me?” with “What is this trying to tell me?” has been a game changer for me.

With over twenty essays in this collection, some were inevitably going to make the same arguments and present the same cases from the election (“telling the same story with different adjectives”). So I took more in from the personal essays that introduced the discussed topic by giving us that irreplaceable connection with an individual’s experience, rather than the pieces that focused solely on conveying information about X and Y.

My favorite essay by far, though, was one that came circling repeatedly into my mind over the course of the book: “As Long As It’s Healthy” by Sarah Michael Hollenbeck. It even started out with a bang for me:

“Nearly every thirtysomething woman I knew had a number in her head—a number she’d had since childhood—of how many kids she wanted and when—two, three, four for me! I couldn’t help thinking, Shouldn’t you wait and see how the first one goes? Even the first time I scheduled a bikini wax I only scheduled one. I wanted to monitor the repercussions before I made any long-term commitments, and I’d like to think that living children are more high-stakes than ingrown pubic hairs.”

Now that’s a guaranteed way to get my attention.

But on a more serious note, I cherish essays that discuss how giving birth is not the only way to have children. And also that having kids is not a must.

“Instead of making a new human, I feel a responsibility to be a better caretaker for the humans who are already here.”

But what made this piece in particular stay with me is the fact that the author talked about being diagnosed with Moebius syndrome.

“My experience of being a disabled woman is discovering in small, sharp explosions what I look like through the feedback of strangers.”
…
“When I was growing up, our family never talked about Annie’s face or my own, and in the few times that I broached the topic with friends, I was told “No one notices” or “It doesn’t matter.”
In my experience of disability, the people closest to me have always expressed their love by telling me that they, almost magically, cannot see it—that this thing that has both directly and indirectly shaped so much of my life doesn’t matter. Instead, it has been the callous strangers and the bullies who have been the ones to say, I notice. It matters.”

I’m going be thinking about this exceptional piece of writing for months to come.

Another essay that caught my attention with its opening paragraph was Kera Bolonik’s “Is There Ever a Right Time to Talk to Your Children About Fascism?” It goes as following:

“There’s a sort of joke I used to tell my friends—a joke that’s not such an exaggeration—to succinctly describe my mother, about how she taught my younger sister and me European geography by recounting the way each country persecuted the Jews during World War II. (Austria? Birthplace of Hitler. Germany? The home of the Nazi Party, and the country he led—anti-Semitism central. Poland? Place of the extermination camps that helped to annihilate most of the Jewish population. And on.)”

Her mother gets me to my core.

There’s more where that came from with the many outstanding feminist essays in Nasty Women. And I feel alive with power because of them.

Note: I’m an Amazon Affiliate. If you’re interested in buying Nasty Women, just click on the image below to go through my link. I’ll make a small commission!

Sweet, funny, and quietly poignant, Debbie Tung’s comics reveal the ups and downs of coming of age as an introvert. 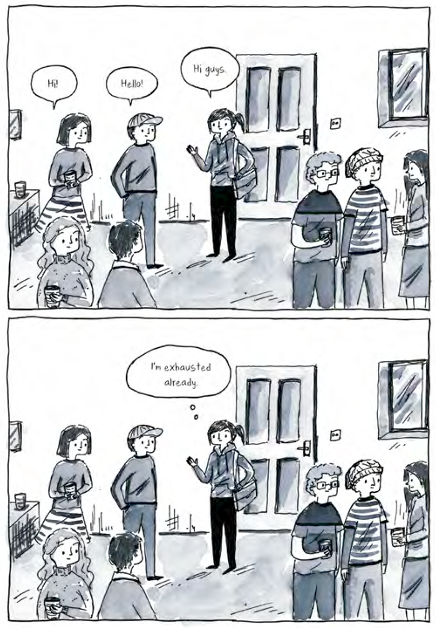 There’s a fine line between being an introvert and having social anxiety, and the author of this book managed to truthfully showcase both. This illustrated gift book full of short comics will make you want to say “STOP READING MY MIND!” Debbie Tung fully managed to show me those shadowy parts of myself through her story.

Also, the title Quiet Girl in a Noisy World perfectly gets me.

I recently listened to the podcast — Quiet: The Power of Introverts with Susan Cain and it fits wonderfully with this illustrated book, especially the parts of Debbie Tung’s early childhood. The podcast, “where quiet voices are heard,” is about introverted kids and focuses on giving parents and educators the tools to empower quiet kids. Which is where the central theme of Quiet Girl in a Noisy World can be summed up by this Susan Cain quote:

“Why shouldn’t quiet be strong? And what else can quiet do that we don’t give it credit for?” 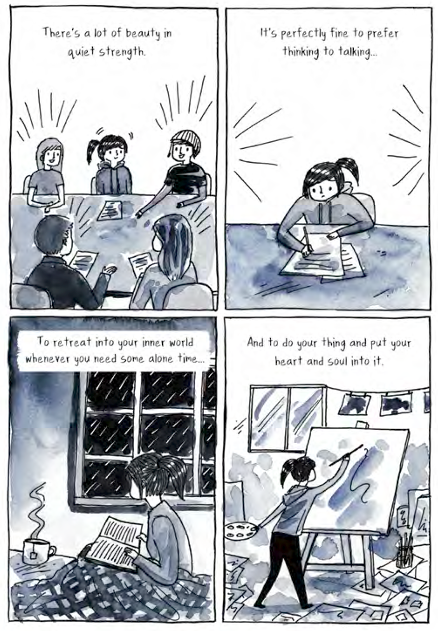 The only tiny hindrance I want to mention are the time jumps and how they made the narrative a bit rocky and unclear at times, from going to college to meeting someone new to marriage to graduate school to flashbacks from her childhood… all over the span of not that many pages. But once it got its right footing, the story worked wonders.

Speaking of which, here are the many moments that got me at my core: 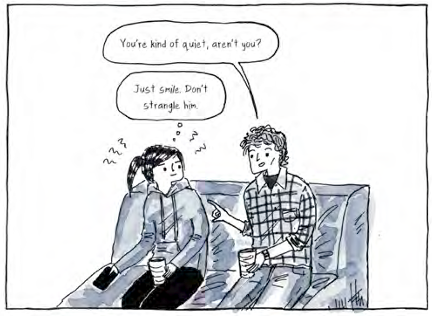 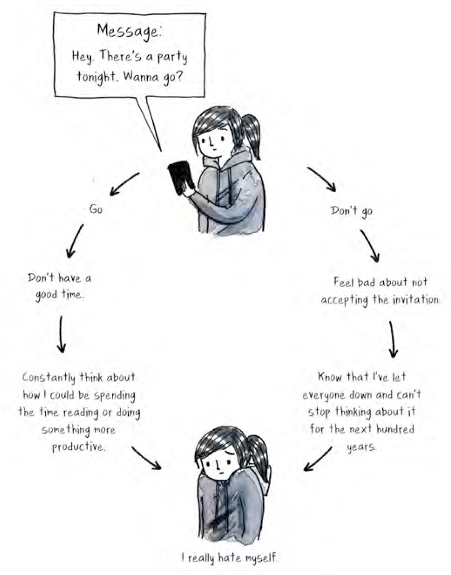 I desperately wanted to push The Subtle Art of Not Giving a F*ck by Mark Manson into her hands whenever she got stressed over declining a social outing. 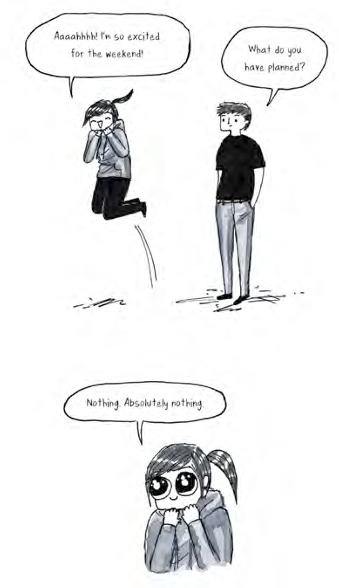 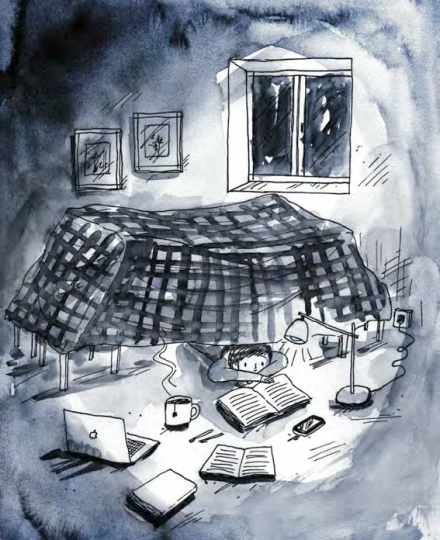 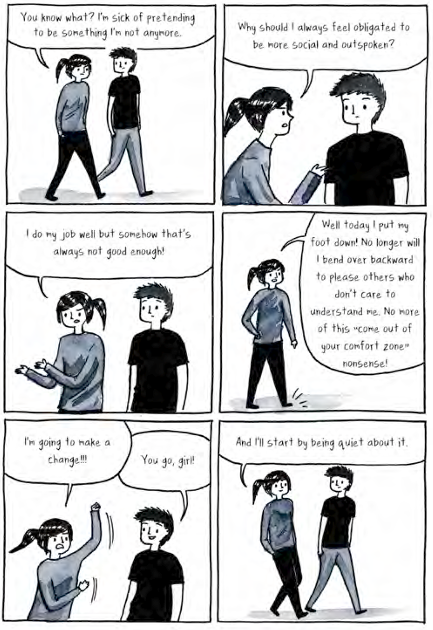 It was beyond satisfying to finally see her accept her introverted self after doing some research on the topic, instead of trying to meet the many expectations “of the extrovert ideal.”

All in all: I was very in tune with everything written in this illustrated book.

Note: I’m an Amazon Affiliate. If you’re interested in buying Quiet Girl in a Noisy World, just click on the image below to go through my link. I’ll make a small commission!