This film is about a family coming together to “celebrate” their dog of 17 years coming to the end of her life, and it’s written by a mother who clearly knows how her boys work best together. Through this family project blossoms a wholesome story that made me completely sink into the film, so much so that I got to let go for all my troubles, which was saying a lot that particular day. 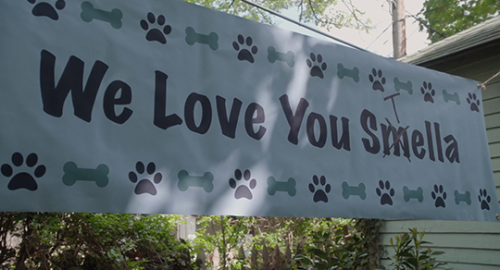 And then, of course, I was flooded back with a wave of nostalgia when it came to the unbreakable dynamic established between Nat and Alex Wolff, which I haven’t experienced since my days of watching The Naked Brothers Band on Nickelodeon. What with Nat’s songs causing 8-year-old me to stare moodily into the night through my window and Alex being the wild child (he finally got a real tattoo, which he shows off in Stella’s Last Weekend, after many years of drawing them on his young self on the show), it was like going back to 2007. There is literally not even one scene where those two managed to let me down. I felt like I got to join in on a secret type of magical link only a few get to experience in their lifetime. And you can just tell THEY’RE HAVING SO MUCH FUN TOGETHER IN EACH SCENE, and it’s hard to not catch up on their fun.

Alex’s character, Ollie in particular always had me holding out to see what next surprising line he would utter, especially with phrases like, “I’m a millennial, Jack, Mom works for me.”

On the flip side of that, here is another movie that I recently watched that had the same where-has-this-been-all-my-life effect:

This is THE movie for someone who, like me, wants a romance film that isn’t about the grand gestures that give me low-key second-hand embarrassment. Instead the storyline chronicles the development of a relationship through minimal gestures (insignificant in their small inhabitance but grandiose in their meaning), like simply being on each other’s wavelength and genuinely caring and paying attention and openly liking each other just as much as the other does; none of that will-they-won’t-they. And it was, quite frankly, refreshing.

The love interest in this, Ben, still has me in heart-eyes. Like, anytime I recall his heartfelt “I just want to be with you,” it gets me all over again. Not only that, but his initial unsureness around her I found beyond endearing.

Speaking of scenes in The Boy Downstairs, there’s one, in particular, I still haven’t gotten over because it’s expresses such a tender and pure form of love that I’ve yet to see on the big screen where two characters bond not through excessive PDA, which I cannot help but skip over, but rather through sharing childhood school traumas and just looking in each other’s eyes and seeing that twinkle slowly appear as the story progresses and your heart opens up.

This scene was so inviting and open and just so damn raw that I took it as my own.

Truly, Ben’s character just sparks one question: Where can I get one? I cherish this sweatered boy so much.

Speaking of their close nature, I cherished how it was expressed through little gestures that I hold so close to heart, like Ben stroking her cheek simply to feel close to her while she’s telling her story, or Diana stroking Ben’s hair while he’s driving, or stealing little forehead kisses… IT’S THE LITTLE THINGS THAT GET ME.

Another thing: the storytelling used with the constant moving back-and-forth created within the timeline made for an interesting effect, similar to how memories resurface upon seeing a person again. So that Diana would go back to their best moments when they’re not on the best of terms in the present day. And it’s brilliant because after such an intimate scene where she shares so much of herself and he accepts her so openly, seeing him then in this completely unfamiliar terrain in the present day recreates the same betrayal she must feel. Like, we had this heartfelt moment and now you’re somewhere that we have no clue how you even got there.

That’s where the underlying dry-humor comes in to lighten up the mood, and just like the aforementioned film on this list, it’s ground-breaking with how it sneaks up on you. It’s the simplicity of Ben getting her humor that creates this easygoing nature with them, especially when it’s shown throughout the film just how few people get Sophie’s joking. (That restaurant scene with the “I wanted to ask if he had lemons,” still makes me crack up.)

Then on the flip side of that, in the present day, the unbearing nature of living close to someone you’re not with anymore, which can quickly create this dangerous slope where you’re walking home every day with him on your mind, wondering if you’ll see him, you know, just to be prepared ahead of time. And in this case, there’s no way to avoid it because Ben’s window is right there, and Diana‘s seemingly innocent “I’ll just check if he’s near his window not because I care, obviously, just out of habit” says it all. And then when he’s not around anymore like he used to, it creates this heartfelt moment of loss when she can’t seek out that piece of comfort in her day. “How’s Ben?” “I don’t know. He doesn’t live here anymore.” (I can literally recite lines from this film even though it’s been weeks and weeks since I first watched it; that’s how good the script is.)