The funny thing with Landline is that I didn’t even fully mean to reread it, I just started the first few pages and then bang I was flying through it in true Rainbow Rowell fashion (see: Why I Fangirl over Rainbow Rowell’s Fangirl (Spoilers: Levi)). I felt like I was at an all-you-can-eat buffet, filling myself with one more page, one more…

As far as time machines go, a magic telephone is pretty useless.

TV writer Georgie McCool can’t actually visit the past; all she can do is call it, and hope it picks up. And hope he picks up — because once Georgie realizes she has a magic phone that calls into the past, all she wants is make things right with her husband, Neal.

Maybe she can fix the things in their past that seem unfixable in the present. Maybe this stupid phone is giving her a chance to start over. . . . Does Georgie want to start over?

A heart-wrenching—and hilarious—take on fate, time, television and true love, Landline asks if two people are ever really on the same path, or whether love just means finding someone who will keep meeting you halfway.

Also funny is the fact when I first read Landline, back in 2015, I came out of it thinking it was my least favorite Rowell book, simply because at that time in my life I couldn’t have cared less about married people. But with this reread now, coming after three years, I can’t get enough of family-based stories. So I was delighted to discover how with time my perspective had changed and matured to the point of gobbling up every little detail concerning the marriage chronicled in here.

It’s so hard to capture all that I loved (because there’s so many specifics) but I tried my best by including it all below:

“It was so rare to make Neal laugh. . . .
Georgie used to tease him about being a waste of dimples. “Your face is like an O. Henry story. The world’s sweetest dimples and the boy who never laughs.”
“I laugh.”
“When? When you’re alone?”
“Yeah,” he said. “Every night when I’m sure everyone is asleep, I sit on my bed and laugh maniacally.”

I was trying to find the best way to describe the humor, when I stumbled upon this interview between Rainbow Rowell and her audio narrator Rebecca Lowman, discussing the book:

Rowell: “…You know what, I don’t like punchline, sort of zingy humor. So I’m not drawn to comedians who are very big. I like people who are just sort of talking and they’re funny when they’re talking. …”

This. This is exactly it.

As well as this quote from the book on savoring what we hold precious:

“I put it in my Save Box,” she said.
“What’s that?”
“It’s actually just a box. I, uh . . . I hate that feeling, you know, when you’re thinking about something you’ve read or heard, and you thought it was so smart at the time, but now you can’t remember it. I save things I don’t want to lose track of.”

This right here hits the core on why I write such extensive notes during my reading.

“They were supposed to end up together, Seth and Georgie.
Well, technically, they had ended up together. They’d talked every day since that first day they met.
But they were supposed to end up together-together. Everyone thought it would happen—Georgie had thought it would happen.
Just as soon as Seth exhausted his other possibilities, as soon as he worked through his queue of admirers. He hadn’t been in any hurry, and Georgie didn’t have a say in the matter. She’d taken a number. She was waiting patiently.
And then, one day, she wasn’t.”

“How had she missed Neal until junior year? He’d started working at The Spoon as a freshman, same as her. Georgie must have seen him, without really seeing him, dozens of times. Was she that sucked in by Seth? Seth was extra sucky—pushy and loud, always demanding Georgie’s attention. . . .
But once Georgie noticed Neal, she saw him around the office constantly. She’d try not to stare when he walked past her desk on his way to the production room. Sometimes, if she was lucky, he’d look her way and nod.”

“Can we go back and start over?”
“How far back?” Georgie tried to fold her arms, but she was still holding that stupid Zima.
“Back to the wall,” he said. “Back to you walking across the living room toward me. To you saying, ‘I’m surprised to see you here.’”
“Are you saying you want to go back to the living room?”
“No. Just go ahead, say it again now.”
Georgie rolled her eyes, but she said it: “I’m surprised to see you here.”
“You shouldn’t be,” Neal said. He lifted his chin and looked directly in her eyes. For the second time in five minutes. For the second time ever. “I’m here because I knew you’d be here. Because I hoped you would be.”

That moment when people stop playing games (Gemma Collins echo) with one another and just present their real selves… Showing someone you’re keen on them and having it reciprocated is a grand gesture.

I equally loved those tiny, intimate moments sprinkled throughout their married life:

“Stop. You’re blowing my mind.”
“Oh, I’ll blow your mind. Girlie.”
“Are you flirting with me?”
He’d turned to her then, pen cap in mouth, and cocked his head. “Yeah. I think so.”
Georgie looked down at her old sweatshirt. At her threadbare yoga pants. “This is what does it for you?”
Neal smiled most of a smile, and the cap fell out of his mouth. “So far.”
Neal . . .”

As well as featuring really beautiful metaphors with flowers, like: “Pizza girl’s name was Alison, and Heather’s face followed her around the room like a sunflower chasing daylight.”

And: “(Neal’s face was like a flower blooming—you’d need time-lapse photography to really see it in action. But Georgie’d become such a student of his face, she could read most of the twitches.)”

To give some background, this quote led me to it: “Georgie exhaled when she heard Neal’s voice, then resisted the urge to ask him who the president was.”

“Can we help you find something?” someone said.
Georgie turned. It was the ecstatic young couple. Still hanging on each other, as if neither of them could quite believe the other was finally here.
“Taxi stand?” Georgie said.
“You’re looking for a taxi?” the boy asked. The man. She should probably call him a man. He must be twenty-two, twenty-three; his hair was already thinning.”

My boy is all grown up.

“Wait a minute.” The boy got out of the truck, then hopped back inside thirty seconds later with his duffel bag. He unzipped it, and clothes spilled out. He started heaping them in the girl’s lap. “Here,” he said, pulling out a thick, gray wool sweater. “Take this.”
“I can’t take your sweater,” Georgie said.
“Take it. You can mail it back to me—my mom sews my address inside everything. Take it, it’s no big deal.”

LEVI GOES OUT OF HIS WAY TO MAKE SURE GEORGIE GETS SAFELY TO HER DESTINATION (on top of the snowy hill).

And Cath caught up with Levi’s good habits along the way because when they notice Georgie’s shoes not having foolproof cover from the Omaha snow, this happens:

“Oh for Christ’s sake,” the girl said. “You can wear my boots.” She reached for the floor. Georgie noticed she was wearing a small engagement ring. “You can have them. I don’t even like them.”
“Absolutely not,” Georgie said. “What if you get stuck in the snow?”
“I’ll be fine,” she said. “He’d carry me across the city before he let me get my feet wet.”

Levi would do it in a heartbeat!! Cue my tears.

I really thought that time would pass and one day I would be ready to move on. But these characters are my home, and I’m never going to stop missing them.

I’ll close off by sharing this beautiful alternate cover for Landline, which has the best details from the book; the Polaroid!! 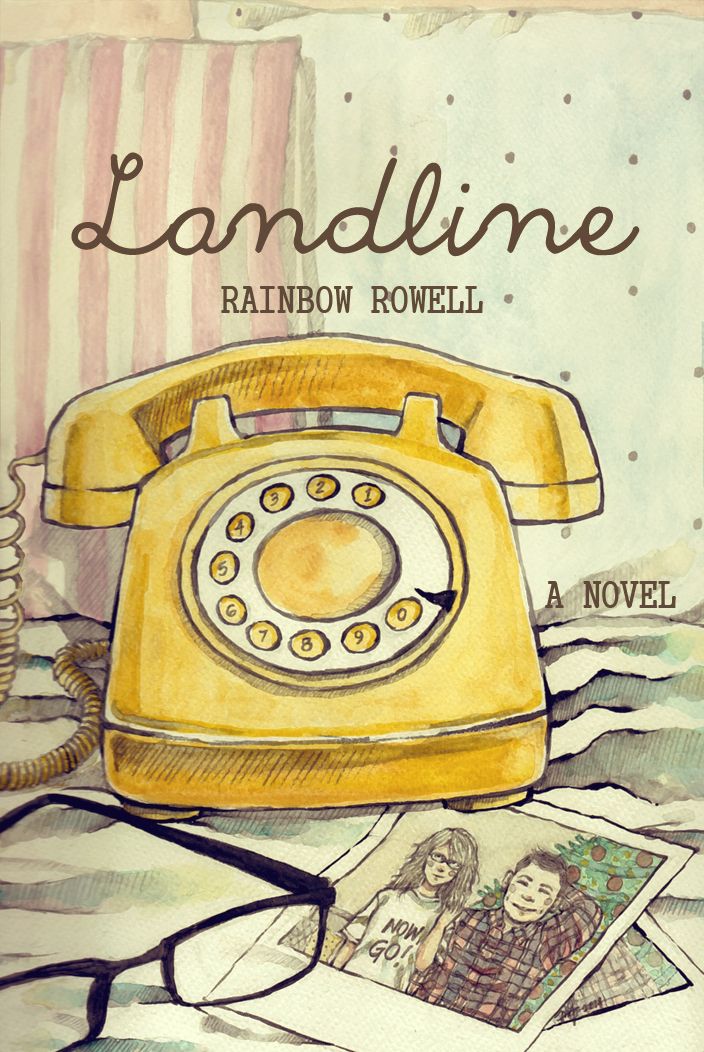 Note: I’m an Amazon Affiliate. If you’re interested in buying Landline, just click on the image below to go through my link. I’ll make a small commission!