Based on Mackenzi Lee’s popular weekly Twitter series of the same name, Bygone Badass Broads features 52 remarkable and forgotten trailblazing women from all over the world. With tales of heroism and cunning, in-depth bios and witty storytelling, Bygone Badass Broads gives new life to these historic female pioneers.

Though I was struggling a bit at the start of this book with the super casual language used for chronicling each historic woman, I realized (rather quickly, thankfully!) that the modern take on these badass broads is exactly what makes this read that more approachable and original.

My issue with previous feminist collections always stemmed from the fact that they came to read like Wikipedia-esque entries and as a result failed to keep me engaged. Which is why I came to like the shorter biography summaries, such as The Little Book of Feminist Saints by Julia Pierpont & Bad Girls Throughout History by Ann Shen.

So Mackenzi Lee’s intriguing take on these “badass patriarchy smashers” in Bygone Badass Broads helped keep them in mind long after I continued to the next entry.

So here is a taste of some of the memorable Badass Broads squad members:

The Queen of Gender Equality

“Arawelo’s new decrees regarding gender roles and government appointments passed the Furiosa Test—meaning they got men’s rights activists riled up. When husbands across the land protested the shake-up, Arawelo and her massive populous of feminist badasses staged a kingdom-wide walkout, leaving their men with nothing but a note on the pillow: Roses are red, gender’s performative, your ideas about women are so hella normative.”

The little poem there had me giggling out loud, which is the last thing I expected from a Nonfiction/History book. Having Lee succeed not only at educating us about the lesser-known women of our times but actually making it enjoyable while doing so is the biggest accomplishment, in my eyes.

“It’s almost like the phrase “yaaaas kweeeen” was invented for her.”

Wrestling Champion of the Ancient World

This particular entry had me giddy with the many pop-culture references*. It’s quite a feat on the author’s part to connect present day to hundreds upon hundreds of years ago, so I will continually applaud her for that.

*Phrases include: TBH, swaggery bro, and the timeless reference at the end of this passage:

“When one particularly swaggery bro bet one thousand horses he’d pin Khutulun, her parents begged her to throw the match because she needed to just settle down with a nice boy already! Khutulun agreed . . . until she heard the bell and looked that smug dude right in his smug dude eyes, at which point animal instinct took over and Khutulun did what she did best: She threw him to the GROUND.”

Cue: The Lonely Island’s Threw It On The Ground.

This unheard of Queen of Thieves who ruled the criminal underworld of Gilded Age New York City was a true surprise for me.

“They call me Marm because I give them money and horses and diamonds,” she said, which are the essentials I, too, expect from my mother.

Founder of the Girl Scouts

This entry screamed for a reference to be made to the Pawnee Goddesses from Parks and Recreation (which I did a whole book tag about). And thankfully Mackenzi Lee delivered at the very end with this closing line: “Hear her womanly roar.” 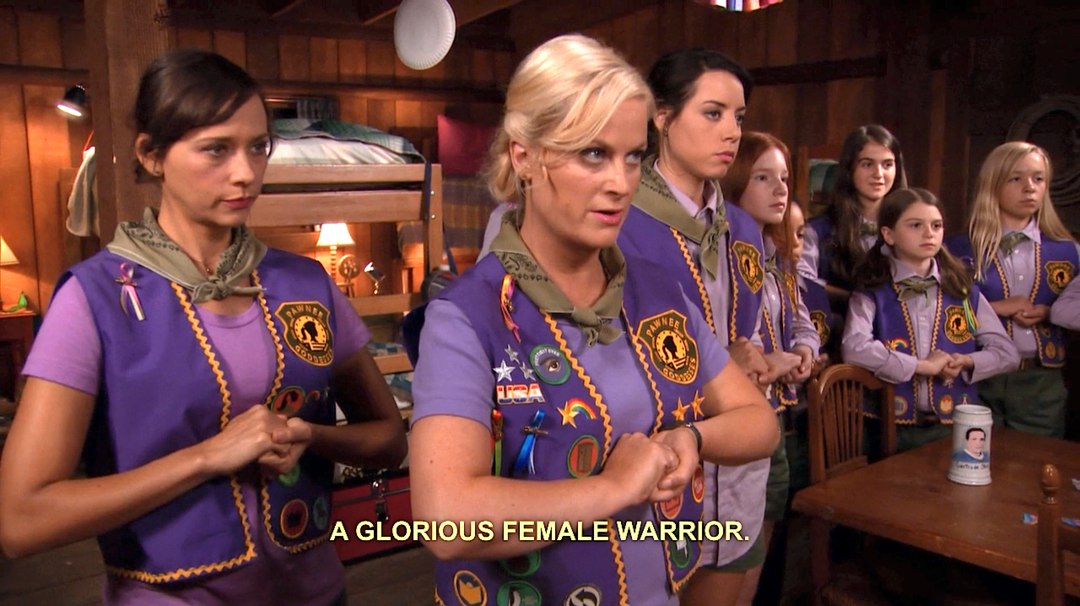 Theoretically, the Most Important Woman in Physics

“When Einstein calls you the most significant and creative woman in the history of mathematics, you can probably call it a day and go home.”

It seems appropriate to note that with this entry I came to see the unshakable commitment to bringing the most color and vibrancy out of these historical women. And it was a delight to discover this time and again in this gorgeously illustrated compendium.

Oh, but before I leave I have to include a few other phrases I got a good laugh at, such as giving Irena Sendler’s dog a WeRateDogs™ worthy rate (“12/10, would pet.”), using the infamous record scratch in Sarah Breedlove’s entry, and comparing Kumander Liwayway’s childhood to that of “a Disney Channel teenager.”

Note: I’m an Amazon Affiliate. If you’re interested in buying Bygone Badass Broads, just click on the image below to go through my link. I’ll make a small commission!