“Some stories tell themselves.”

I’ve been an avid Sarah Dessen reader since that fateful night that led me to pick up Just Listen years ago. And to this day I’m grateful that read was my first choice because it utterly captivated me and cemented my decision to then check out nine more books by the author.

So I’ve been clearly patiently waiting for this newest book to come out, checking info about it almost monthly since I finished reading Saint Anything in 2015. And thankfully Once and For All lived up to the hype I created in my mind.

However, I will admit that I went in a bit hesitant since I recently came upon the realization that I only like a certain type of book when it comes to YA, i.e. not set in high school. So the main reason I then ended up enjoying Once and For All was because it was about all family and summers and wedding shenanigans, and it felt both real and complex.

The last young adult book I read was Nina LaCour’s We Are Okay back in February, so I was pleasantly surprised to see this newest Dessen book having a similar structure that I loved in the latter. We have switching chapters set between the present and past to give us a full picture of everything seventeen-year-old Louna Barrett went through in the past year.

I felt the latter most critically the moment we found out what exactly happened in Louna’s past to make her so guarded and cynical. I had guessed what the addressed topic would be from the start, but the details weren’t clear to me until put on paper.

But I’m getting ahead of myself. Let’s start at the beginning with what I loved:

“Real love didn’t exist, they maintained, despite building an entire livelihood based on that very illusion.”

“Are you serious, with all this?”
“What this?”
I nodded at the door, which Grace had left slightly open behind her. “The way you talked to her. Is it a joke, or not?”
“I never joke when it comes to pretty girls,” he replied.
Of course he didn’t.
“Don’t feel bad about not understanding me, though,” he said. “I’m kind of an enigma. Mysterious, hard to know.”
“People that are hard to know don’t often announce the fact they are hard to know,” I pointed out.”

But over time I grew to love how effortlessly he managed to light up any scene with his cheerful and easygoing manner. He’s all sunshine and it’s a challenge trying to not get swept up.

“I didn’t hear him get called anything, did you? Guess that means we can name him whatever we want.”
We? I thought. Out loud I said, “What’s Bee going to say about this?”
“Oh, she’ll be fine. She loves animals.” The dog finished off the water, then sat back and shook its jowls, sending droplets flying. “And anyway, she won’t have to deal with him. He’ll go everywhere with me.”
“On foot,” I said, clarifying. He nodded. “What’s going to happen when you crash at people’s houses, like last night?”
“This is a small dog,” he replied. “Compact. Won’t be a problem.”

This guy can get out of anything. It’s astonishing, really. 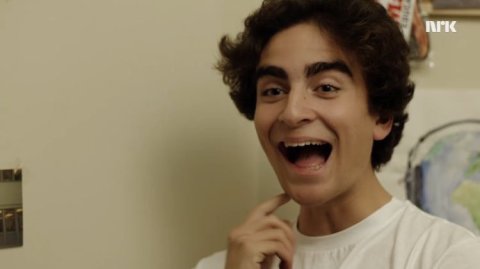 “This is the first wedding you’ve attended that you weren’t in?”
“Yep,” he replied. “It’s like seeing the man behind the curtain. And that man is scary.”
“Sorry,” I said.
“But that’s the thing,” he replied. “It’s okay. Because when I do get asked to another wedding, I won’t go into it thinking about everything that can go wrong. I’ll just enjoy the party and the moment.”
“Good for you. I wish I could,” I said.
“You can, though.”
“Nope. Too late.” I cleared my throat. “That ship has sailed. Once you see how things can go, you can’t unknow it.”
I felt him look at me, and realized this sounded harsh. But it was the truth. It took a lot to have hope in this world where so little evidence of it existed. We may all start in the same place, at a church, watching a couple begin a whole new life together. But what we glimpse beyond that is different for each of us, a funhouse mirror reflection of our own experience. Maybe if nothing bad had ever happened, you didn’t even consider those clouds and storms ahead. But for the rest of us, even the brightest sunshine carried a chance of rain. It was only a matter of time.”

“Now, in his arms, facing the water, I could smell salt on his shirt and beneath it the slight tinge of his cologne, as well as sweat. It would only be a matter of time before someone came along, walking with their dog or kid, making it clear that the beach, and the night, were no longer ours alone. Thinking this, I squeezed my eyes shut tightly, again willing time to stop. Like the game Ethan played with his friends, striking a deal—I would have given anything for a few more hours.”

This is exactly why I prefer sunsets to sunrises because if you just spent the night talking with someone special, seeing the sunrise is bound to be a disappointment. Nothing signifies that a night is truly over quite like the first hint of light, as Dessen put it: “yet more proof of the intrusion of the world.”

But what I kept repeating to myself throughout this part of the book was to not get sucked into Ethan and Louna’s relationship, because it was hinted at from the start that it doesn’t end well.

“I’d never had this feeling before, that something big was about to happen, and there was nothing I had to do but wait for it.”

“8:20, I thought. I’d just gotten my Spanish quiz. Ethan should have been in English, trying not to look at the hair of the girl in front of him, which he maintained was so greasy it literally dripped onto his desk. I knew this. I knew everything about him. So how did I not know if he was all right?
The hallway was emptying as everyone went into classrooms and down the nearby staircase. Moments earlier, it had been packed, elbow to elbow, with me just one of a sea of people. Now I stood there, staring at my screen, until all the doors around me shut and I was the only one left, standing alone. I told myself I wasn’t moving until I knew something, that I’d stop time in this interim. Later, it would seem silly that I thought I could do this, have some control over events already unfolded. But I believed in a lot of things, before. I never heard from Ethan again.”

My stomach dropped at that last sentence. They’d had the best night of their lives, talked everyday since – every moment, really – and then one day a tragedy happens and that’s it… no more plans, no more talks, nothing. Just radio silence.

All this to say that I’m still so grateful Sarah Dessen decided to release a brand-new book. I don’t see myself ever tiring of her comforting characters. So for now I’m back to patiently waiting for new content, hopefully set to arrive in the near future.

Note: I’m an Amazon Affiliate. If you’re interested in buying Once and For All, just click on the image below to go through my link. I’ll make a small commission!

4 thoughts on “Review: Once and For All by Sarah Dessen”