This graphic novel is set around Sam’s commitment to write an article about his two months spent in NYC while having no verbal interaction with any other human being. The pressure is especially on since this is his first written article after a decade of photo reports.

To be frank, I had no idea what to expect going into this, particularly where the art is concerned, since that cover doesn’t give away much. But I was pleasantly and quickly surprised with the colors and illustrations in here. 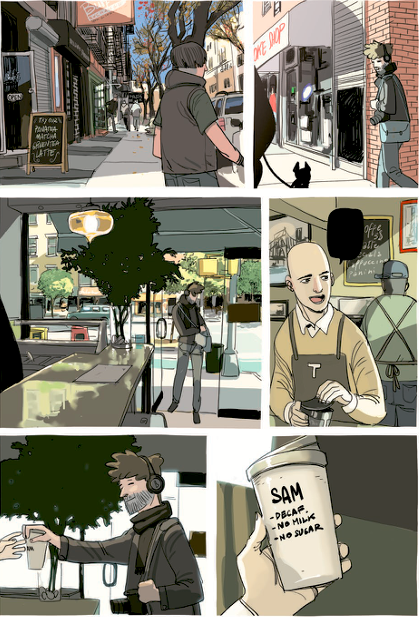 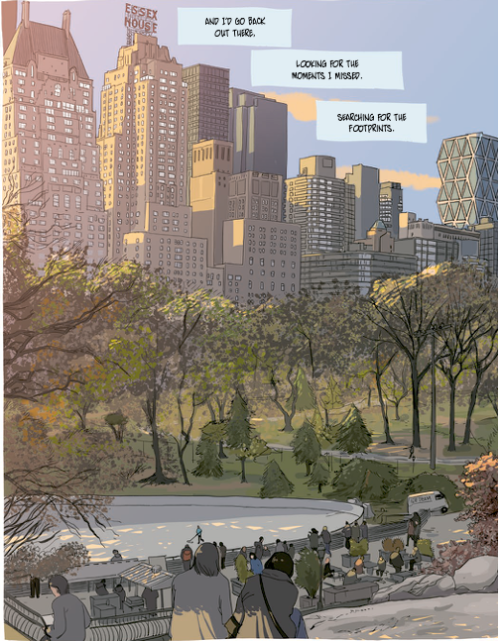 However, I was dismayed to find the commentary in this graphic novel feeling a bit off and irrelevant, which became harder to ignore when it seemed to occur on numerous occasions. Also, the narration itself bothered me immensely when it was unclear as to who was chronicling the story. It definitely managed to throw me for a loop in regards to that aspect.

Speaking of which, that ending… since it wrapped up so quickly it took me a bit to gather and sort my thoughts to fully understand everything that went down. One thing I do know for sure: I have literally no clue as to what happened in the romantic stages of this graphic novel. Genuinely, I have no idea who this Joan is in Sam’s life, and how the hell she managed to follow him around NYC so many times…

If nothing else – and this might be considered a spoiler – I did appreciate the addition of having deaf representation in here. But again, since it was talked about on the page only towards the end, I was sad to see it not fully delved into.

Overall, though, I’m still glad I tried my hand with this gorgeously illustrated graphic novel by Italian-born writer and cartoonist, Giacomo Bevilacqua.

Note: I’m an Amazon Affiliate. If you’re interested in buying The Sound of the World, just click on the image below to go through my link. I’ll make a small commission!