I was excited to start this companion graphic novel, which is told from an alternative perspective than the one in Boxers. And for the most part, it did not disappoint.

China, 1898. An unwanted and unwelcome fourth daughter, Four-Girl isn’t even given a proper name by her family when she’s born. She finds friendship–and a name, Vibiana–in the most unlikely of places: Christianity.

But China is a dangerous place for Christians. The Boxer Rebellion is in full swing, and bands of young men roam the countryside, murdering Westerners and Chinese Christians alike. Torn between her nation and her Christian friends, Vibiana will have to decide where her true loyalties lie…and whether she is willing to die for her faith.

To be frank, the plot was for the most part quite uneventful compared to the first volume. And so it took me a few days to complete it. But once Saints reached those last fifty pages, I was hooked. Gene Luen Yang once again proves what a masterful storyteller he is. My everlasting admiration is in his hands.

I was proud of Vibiana when she finally realized what she wanted to do with her life, but the whole thing was left kind of open-ended with her last appearance… 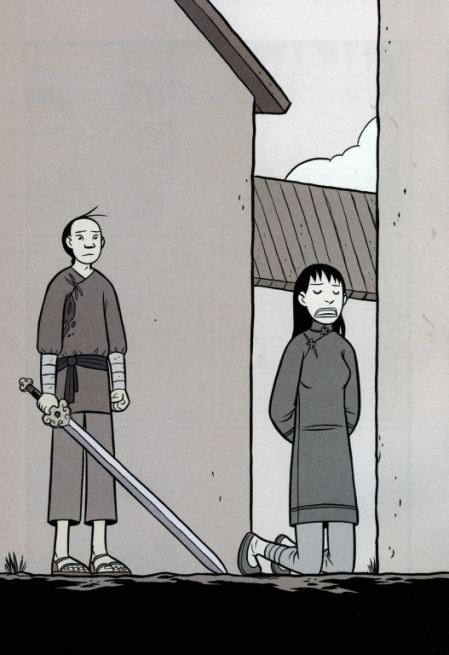 I was left perpetually confused until everything gets connected at the end, which ended up spoiling my enjoyment a bit while reading.

In the end, I loved Saints more for its opportunity to give us some closure on the first volume and not quite for its lead. But that’s not to say that I was disappointed–I’m pretty sure Gene Luen Yang can do no wrong with his storytelling in graphic novels. I just had different expectations going into this, for better or for worse.

Note: I’m an Amazon Affiliate. If you’re interested in buying Saints, just click on the image below to go through my link. I’ll make a small commission!