“If you can affect someone when they’re young, you are in their heart forever.”

While looking for more memoirs to read and love, I stumbled upon Where Am I Now? and was greatly surprised by how addicting Wilson’s writing of her life was. I had no idea what to expect. But I loved it.
This memoir goes quite deep into a lot of subjects that always intrigue and leave me wanting for more. I’m mainly talking about Wilson questioning her faith, the waning of her career, feminism, sisterly love, OCD, anxiety, depression, mental health care, grief… a plethora of topics that were all given their respective page time.

“Mostly, my stories are about being young and a little out of place. It’s how I’ve felt most of my life: I was born the first girl after three boys, the only Jewish kid in my class, the only girl I knew whose mother had died, the only neurotic in Southern California (or so it seemed), and the only child on film sets full of adults. I was always in someone else’s world, and I always knew it. This, I’ve learned, is a far more common feeling than I once imagined.”

Where Am I Now? was both personally relevant and entertaining. Mara Wilson’s “neurotic sense of humor”  that was right up my alley. I ended up laughing out loud uproariously more than I was anticipating– something I always welcome with open arms.

Just to give you an excerpt, here’s one instance (out of many) that Wilson took me by surprise with her humor:

“You want to do comedy?” My college boyfriend Sam was incredulous. At some point early in our relationship, it had been established that I was the flighty, funny one, and he was the sensible one, so it was his duty to curb my grandiosity. We were a living screwball comedy.
“Why not?” I said, a little insulted. “I think I could. You think I’m funny.” One of the first times I’d gotten Sam’s attention was when our Writing the Essay teacher had asked us to “make the sentence ‘The woman walked down the street’ interesting,” and instead of bogging it down in purple prose, like many of my classmates, I had written, “The woman walked down the street naked.”

I picked this book up at exactly the right time for me. It was an important, heartfelt, funny, and enlightening read that had me enraptured till the end. Oh, also the motto in their household has stayed with me, “The only stars are in the sky.”
It was a great way to start the year of 2017.

“Trying to get some rest while filming the Bruce Bogtrotter cake scene. It took so long to film that instead of putting a start and end time on the call sheet, they just put an infinity symbol.”

“Danny, Joel, Jon, me, and baby Anna on the steps of my Mrs. Doubtfire trailer.”

(The essay about her sister was one of my favorites.) 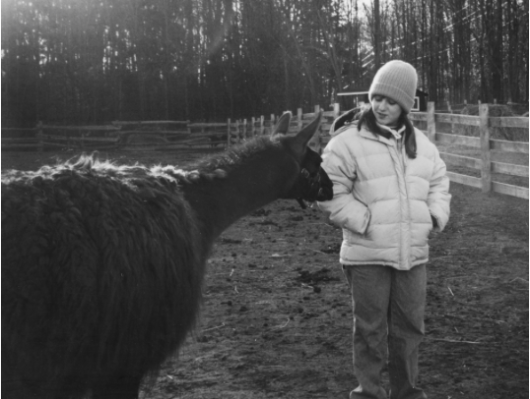 “Hanging with some llamas on a crew member’s farm with Laurie. This is about the only positive male attention I got in middle school.”

“One of my first ever film scenes, but I never felt nervous. We already felt like family.”

(The essay on Robin Williams and his death had me on the edge of tears.)

Note: I’m an Amazon Affiliate. If you’re interested in buying Where Am I Now?, just click on the image below to go through my link. I’ll make a small commission!