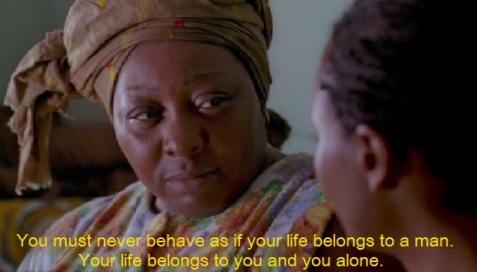 —  Chimamanda Ngozi Adichie, Half of a Yellow Sun.

We Should All Be Feminists is a personal, eloquently-argued essay – adapted from the much-viewed Tedx talk of the same name – by Chimamanda Ngozi Adichie.
Which I have, not so coincidentally, watched numerous times— so much so that I have come to learn and preform the speech alongside her.

The modified book version of the talk was a very quick and important read that, like the talk, will stay with me for a long time (especially all the beautifully poignant quotes):

“He told me that people were saying my novel was feminist, and his advice to me – he was shaking his head sadly as he spoke – was that I should never call myself a feminist, since feminists are women who are unhappy because they cannot find husbands.

So I decided to call myself a Happy Feminist.”

“We have evolved. But our ideas of gender have not evolved very much.”

“It is easy to say, ‘But women can just say no to all this.’ But the reality is more difficult, more complex. We are all social beings. We internalize ideas from our socialization.”

“The problem with gender is that it prescribes how we should be rather than recognizing how we are. Imagine how much happier we would be, how much freer to be our true individual selves, if we didn’t have the weight of gender expectations.”

“I know a woman who has the same degree and same job as her husband. When they get back from work, she does most of the housework, which is true for many marriages, but what struck me was that whenever he changed the baby’s nappy, she said thank you to him. What if she saw it as something normal and natural, that he should help care for his child?”

“Some people ask, ‘Why the word feminist? Why not just say you are a believer in human rights, or something like that?’ Because that would be dishonest. Feminism is, of course, part of human rights in general – but to choose to use the vague expression human rights is to deny the specific and particular problem of gender. It would be a way of pretending that it was not women who have, for centuries, been excluded. It would be a way of denying that the problem of gender targets women. That the problem was not about being human, but specifically about being a female human.”

Also, I found this slam poem* to be really fitting with the subject:

Overall, I was truly impressed with We Should All Be Feminists and hope to read more from the author.

Note: I’m an Amazon Affiliate. If you’re interested in buying We Should All Be Feminists, just click on the image below to go through my link. I’ll make a small commission!

1 thought on “Review: We Should All Be Feminists by Chimamanda Ngozi Adichie”