“Just because you’re good at something doesn’t mean you have to do it.”

This tale follows star athlete and straight-A student Nanette O’Hare. Nanette has played the role of dutiful daughter for as long as she can remember. But one day, a beloved teacher gives her his worn copy of The Bubblegum Reaper—a mysterious, out-of-print cult classic—and the rebel within Nanette awakens. 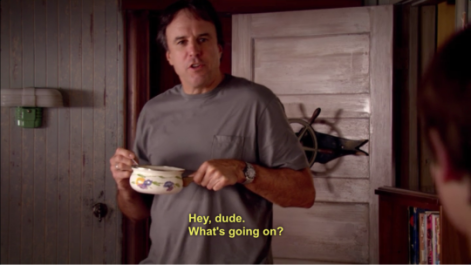 The whole premise of a book within a book captured my attention from the start.

“The Bubblegum Reaper is about a boy who identifies himself as Wrigley because he’s addicted to Wrigley’s Doublemint chewing gum. He says it calms his nerves, and he chews so furiously (and often) that he frequently gets jaw aches and even “the occasional bout of lockjaw.” He never tells you his real name as you follow him through a year of high school.”

I still feel fully invested in The Bubblegum Reaper and on finding out what really happened to Wrigley at the end. What did he quit?

And Nanette’s reaction to the ending of the book was exactly how I felt after finishing some of my all-time favorite stories:

“This book is me. Me. It’s so much more than a story. The author has a responsibility to provide answers. All the answers!”

Luckily for her, the author of Nanette’s new favorite book lives within walking distance of her school.

“And I hear that if you offer to buy him a cup of coffee at the House, he’ll speak with you. Although I should warn you that he never, ever gives a straight answer. And I think he actually hates The Bubblegum Reaper now.”

They arrange to meet for coffee where she asks all the pressing questions we want to know:

I LOVED his response to Nanette’s question, “What happens to Wrigley after he gets out of the creek?”

“See that nice woman who served us our coffee?”
I looked back over my shoulder at the tall cashier with the brown ponytail and the permanent smile on her face, and I nodded.
“Her name is Ruth,” Booker said. “Ever see her before?”
Kids my age never came into this coffee shop, so I said, “No.”
“Maybe you won’t ever see her again.”
“So?”
“You only got to see five minutes of Ruth’s story. And that’s just the way it is. But Ruth, well, she goes on now whether you’re looking or not. She does all sorts of things that some people see and some don’t. But your version of Ruth’s story will be the five minutes you spent buying coffee from her. That’s just the way it is.”

After she receives her answers, she befriends the reclusive author, Nigel Booker.

“And if you are one of those pessimistic people who think that an old man can’t befriend a teenage girl without some sort of perverted, deviant ulterior motive, let me end the witch hunt right here and now. Booker was as grandfatherly as they come and never once did or said anything inappropriate or sleazy. No funny business at all ever went on between us. I loved him like I loved walking through summer grass barefoot, like I loved a warm mug in my palms, like I loved driving on a long road as the sun sets in the distance. It was a good, safe, simple sort of friendship—well, at first, anyway.”

So the beginning of this story was great— seriously, the amount of quotes I have in my notes from those first 50 pages are a tad excessive. I just felt like the author perfectly got me.

For instance, Nanette talking about Charles Bukowski’s “The Genius of the Crowd” perfectly captures the feeling you get after finishing a fantastic book:

“Reading that poem was like putting on the proper prescription glasses after bumping into walls for my entire life. Bukowski was able to sum up precisely what I had been feeling for many years, and he made it look so easy on the page.”

Also, I have to share this next quote because reasons:

“We evolve as people. I’m not the same man who wrote that book twenty-some years ago. And you won’t be the same girl in love with Wrigley forever.”
I blushed because he was right about one thing: I absolutely was in love with Wrigley. I’d even begun hanging around the pond in our town where turtles sun in the summer because I was secretly hoping that Wrigley would magically show up—like I could think him into existence, as we do when we read fiction.”
This is 100% me about Ronan Lynch (I wish I were joking).

But circling back to this story, I was enjoying myself immensely for the first half. Time was flying by “like pelicans over the sea while you stretch out on a towel during a hot summer’s day.”

But then Alex (aka Little Lex) and Nanette meet. And I found them to be a bit pretentious when they were together, especially with the whole “I don’t want to be like everyone else.” I personally felt that Nanette was a bit on a high horse when she talked that way (and she did numerous times).

“I used to worry that I was asexual or something, but as Alex and I got to know each other, taking long rides in his Jeep with the top down, going to art house movies, reading each other poetry on park benches in the city, I started to realize what sexual attraction was all about.”
How am I not supposed to think that after reading what she just said??

I really didn’t like Nanette and Alex together, and I don’t get why they “fell in love” so quickly.

Alex just really, really bothered me with his comments and violent tendencies.

“You can fight with poetry.”
“Sometimes words just aren’t enough for the situation at hand.”
“Yeah, but violence? That’s never good.”
“Not good, but sometimes necessary when people try to make you believe you are secondary or that you shouldn’t even exist. Why do you think we study wars in history class? How many months do we spend on World War II alone?”
Is he seriously comparing his past situation to the terrors of World War II??? I mean, even Nanette commented it.

“It was horrible to see him locked up like an animal. And yet I was pretty sure he’d acted like an animal that needed to be caged, which scared me.
“Are you okay?” I asked.
“Never been better,” Alex said as he hopped off the small bed. “I’m like Henry David Thoreau in here. Nelson Mandela. Jesus Christ, even.”
“This isn’t a joke. They’re pressing charges,” I said.
“Let them.”
And again, Nelson Mandela?? You’re seriously going to compare your mediocre situation to Nelson Mandela?

“I thought I knew Alex, and what we had felt so right. For a while there, I was never surer about anything in my entire life. But Alex wasn’t who he seemed to be at first, which ironically is exactly what he claims to be against—posturing, or “pageantry,” as Wrigley says.”
Because insta-love isn’t love.

Also, Nanette talking in third person all of a sudden was positively unnerving and I was just hoping for it to come to an end.

But on a more positive note,  I did really appreciate June opening Nanette’s eyes to the situation:

“Did he even ask you one question about yourself when he showed up uninvited and interrupted—and based on what you told me, I’d even say ruined—your family’s Christmas? You told me about driving the Jeep with your parents, and it sounded like pure bliss, and then Alex inserts his problems into your life, and you end up here feeling anxious and responsible. Can you see how that makes Alex out to be the villain here?”
YES! Thank you!

Overall, the first 50 pages were great, but Alex’s introduction to the story and Nanette’s nebulousness ruined the story a bit for me.

However, listening to this amazing song helped a lot.

Note: I’m an Amazon Affiliate. If you’re interested in buying Every Exquisite Thing, just click on the image below to go through my link. I’ll make a small commission!