This follows Oddly Normal, a ten-year-old girl with pointed ears and green hair— a half-witch who will be the first to tell you that having a mother from a magical land called Fignation and a father from Earth doesn’t make it easy to make friends at school! On her tenth birthday, she blows out her cake’s candles and makes a disastrous wish.

Now, Oddly must travel to Fignation to uncover the mystery of her parents’ disappearance.

I loved the look of Oddly Normal, so I picked it up and it did not disappoint. I’m still amazed with the art style, it’s so stunning with all the details and the color palettes.

And when Oddly arrives to Fignation, she has new classmates, new teachers and bewilderment new lunch menu. Oddly enough the first day of a new school is a strange going on … 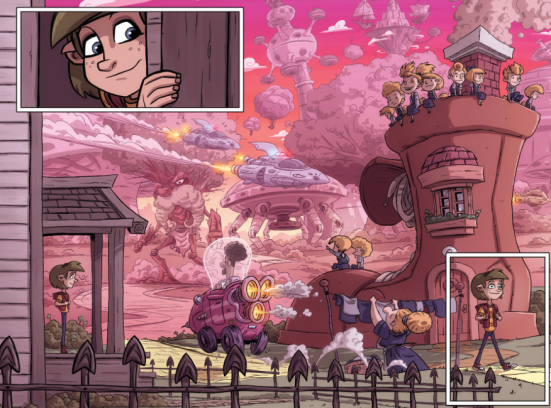 I’ve been staring at all the pictures from the volume for so long because they’re just so gorgeous.

I’m excited to see what the next volume will bring.

Note: I’m an Amazon Affiliate. If you’re interested in buying Oddly Normal, Vol. 1, just click on the image below to go through my link. I’ll make a small commission!